The Philadelphia Water Department has teamed up with Mural Arts to unveil a renewed Venice Island in Manayunk. They are hoping to inspire those looking for the greener side of things in Philadelphia.

Starting at Pretzel Park, a cascade of small, vinyl mural pieces serve as a path down to Venice Island. The shockingly-blue bubble-shaped images of fish and turtles sprawl across the neighborhood’s blocks and invite people to follow the murals like breadcrumbs to the recently renovated recreation space. 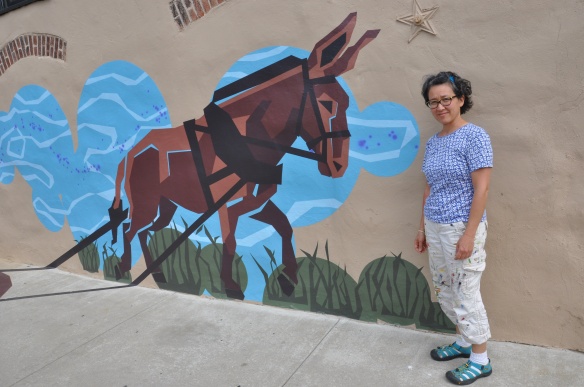 Eurhi Jones with one piece of the mural that represents a time when mules would carry boats along the canal. (Greta Iverson/for NewsWorks)

Eurhi Jones  was selected from a group of mural artists to create the piece that she said tells a story of the canal’s history dating back to the early 1800s.

“I don’t really have the human element here [at Venice Island],” Jones said. “But, as we go up the street, what’s mixed in with the natural element is the human impact of how people have been in consort with the river.”

The mural pieces end at Venice Island, where large steps are covered in images of native wildlife, particularly the American Shad, which naturally inhabit the Schuylkill.

“What was here before was not very sophisticated and it wasn’t as welcoming. So this is a huge transformation for the community,” said Tiffany Ledesma, a manager at the Philadelphia Water Department.

The formerly dilapidated space on the edge of Manayunk holds more than 4 million gallons of sewage and storm water runoff that gets pumped into a local water treatment plant.

“This is the kick-off of using this site for recreational purposes,” Ledesma said. “People aren’t used to the idea of coming down here with their kids because of the old site.” 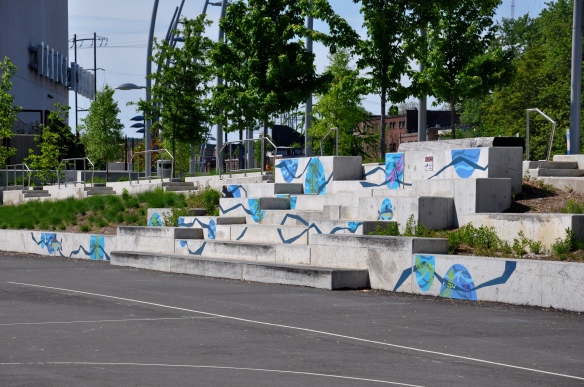 The mural ends at the pavement above the water basin. (Greta Iverson/for NewsWorks)

The Parks and Recreation Department has taken control of the basin to create a welcoming recreation center where they can freely host events and performances for the community.

“There were many community meetings, and this was the ultimate reflection of what the Parks and Recreation wanted and what the community wanted,” Ledesma said. “They really wanted to see theater here. This is something that we’re very fortunate to make work here. This is very, very unique.”

For Jones, the project was “a dream come true.”

“I personally do public work about environmental consciousness raising and sustainable issues and conservation,” Jones said. “I do a certain amount of teaching and I try to make it about art.”

While people see art along the streets and start using the space for sunbathing along the river, treading alongside the canal or playing a game of basketball, Ledesma hopes they will choose their favorite pieces and promote the art with social media by using #PhillyWaterArt.